skip to main | skip to sidebar

Guacamole. Green, spicy and delicious. Or a least it should be. In Mexico this super-salsa is used not just as a dip for tortilla chips, but in Quesadillas, tasty Floatas (Tacos Dorados - deep fried rolled tortillas filled with shredded beef or chicken, potato and cheese), Alambres (aka Fajitas - chicken with ham or beef with bacon in cheese with onions and peppers wrapped in a soft flour tortilla) and as an accompaniment to any kind of taco.

But what makes a good guacamole? Perhaps it's simplicity. The basic recipe counts only six ingredients as necessary: Avocado (perfectly ripe), coriander, lemon or lime juice, garlic, green chilli for heat and a pinch of salt. Combine these ingredients, preferably in a pestle and mortar to preserve some texture and it's ready to serve. Easy, no?
Let us suppose for a second that for whatever reason instead of making some fresh guacamole, I want to purchase some ready-made from a UK supermarket. Where should I go? Are any of them up to scratch?
One day Guacablog woke up and decided to answer these questions. 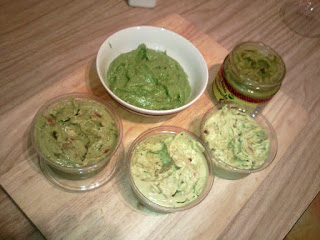 Clockwise from Top: Homemade guacamole, the Old El Paso version, Tesco guacamole, Waitrose guacamole, and Sainsbury's Be Good to Yourself reduced fat guacamole.
So we went to Waitrose, Tescos, Sainsbury's Morrisons and Marks & Spencer and bought some of their guacamole offerings.